What’s Happening with the new Banknotes?

As you may have heard by now, all of the British notes will, in due time, be changed over from the regular paper versions to that of polymer plastic. The bank of England had printed a billion notes that were then sent out into circulation starting on the 14th September this year.

The new design features not only a portrait of the queen but that of the author Jane Austin who is known for novels such as Pride and Prejudice. In fact, the new £10 note is the only British note to feature another woman other than the queen on the same note.

The new notes are no longer made out of paper but are now made out of polymer. So, what is polymer you may be asking? Without going into scientific terms, polymer is a simple form of plastic which we use a lot within everyday life products such as packaging and coating on electrical wiring.

As previously stated, polymer is used within many everyday items, but why use it for money? In short terms, plastic instead of paper means that the bank notes now have a much longer lifespan.

The polymer banknotes are also cleaner than the original paper ones due to the plastic making them dirt and water resistant. Plastic also doesn’t tear as easy as paper which is a bonus meaning their lifespan is increased.

Lastly, because of the see-through design areas within the note, the bank notes are much harder for fraudsters to copy.

When will the £20 notes be released?

The next batch of notes to be released will be the £20 note. The current set date for the new batch to be released is in the year 2020 after giving the £5 and £10 notes chance to be completely circulated and the old ones to be taken out of the current circulation. 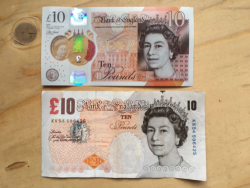